Vote No, it’s the only way to save Scotland 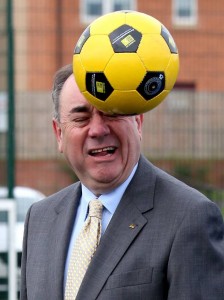 So, on the eve of the Scottish Referendum you’ve only got one thing to do and that’s to put a cross in the No box.

The way things stand just now, Salmond et al have plans to make £400 million worth of cuts to the NHS in the event of a Yes vote. Now, this is despite us going to be £6k better off each year. The time is right to stand up against the SNP, the Yes campaign and crush it in these last hours. No doubt the Yessers would have you believe that this is a doctored document, but the SNP haven’t actually denied the legitimacy of the document, merely that it was leaked. God forbid that us, the people of Scotland, should know what kind of state the NHS would be in if he gets his way. The document itself can be found here.

Many a time I’ve heard that a vote for Yes isn’t a vote for Salmond and the SNP and yet a No vote is an endorsement of Cameron and the Tories. This itself is hypocritical from the Yes campaign, especially since the motley crew at the SNP wrote the mandate on how an independent Scotland would operate. Look around the world just now, and we have a grave threat in the form of IS. Now, the SNP and the Greens are of the opinion that removing Trident  is the only way to go and threat we won’t be attacked because we’ll no longer be part of the UK. This is so far from the truth it’s unbelievable. We would be targeted because we don’t c0nform to the ideals of the IS terror group.

Alas, we also wouldn’t have a security service in the form of MI5, MI6 etc, although as originally said by Sturgeon, it would be the case that the security agencies mentioned above (along with those in the USA) would share their information with us. That’s right, they would just willy nilly share out this information as if you’re given out a tip off about a bet, or giving out a bus timetable.

No, we can’t stand for this, and we won’t. We won’t be lambasted by the SNP and Jim Sillars who has at the tail end of the campaign joined in and threatened to bring the banks to it’s knees and nationalise BP. We’ll let that last one sink in; he wants to nationalise BP. Is this the kind of image that we want to portray to the world that we’re a bunch of Braveheart loving, English hating, sword clashing numpties? No. Again,  the word no springs up, and it’s clear what we must do and that is to vote No. We don’t have enough time to list everything here, but the massive deficit we would be in is a clear reason to say no to the SNP, and bring about their demise. They’ve caused a massive rift in Scotland and one which won’t be easily forgotten. Crush their campaign and then move onto defeating them at the next election.